A Special Holiday Concert by the Icelandic band ÁRSTÍÐIR.

Not many bands can lay claim to the kind of dramatic career development that the Icelandic band Árstíðir can. Formed in the wake of the 2008 stock market crash, they found themselves catapulted to the top of the Icelandic music charts within six months of their debut, and then forged ahead with their 2010 tour despite a volcanic eruption that stalled global travel.

In 2012, Árstíðir was the first Icelandic band to ever win the Eiserner Eversteiner European Folk Music Award (in Plauen, Germany) and were scheduled to play the prestigious TFF Rudolstadt festival in July 2013. While on tour in Germany that year,an impromptu performance of “Heyr himna smiður” in the Bürger Bahnhof train station in Wuppertal swept them up in a tidal wave of international attention. Hastily recorded by a friend who posted it to YouTube, the video received more than four million views and sparked global interest in both the band and Thorkell Sigurbjörnsson’s composition.

By May 2014, they had launched a Kickstarter campaign that quickly raised $70,000 (substantially exceeding the initial $20,000 goal) to finance their third album, Hvel (Spheres). In return for their investment, backers were promised not only a copy of the finished recording, but also gifts ranging from hand knit Icelandic sweaters to vials of volcanic ash from theEyjafjallajökull eruption.

In 2016 the group toured the Netherlands with a special theatre show together with Anneke van Giersbergen and they followed up with a European tour together with Sólstafir and Myrkur. Árstíðir is going back to their original trio setting this year. In March of 2018 their newest single “While This Way”, from their fourth studio album “Nivalis” was released. Nivalis meaning “like snow” in Latin and serving as the inspiration to play some intimate christmas shows in the Netherlands in December. It’s shaping up to be magical! 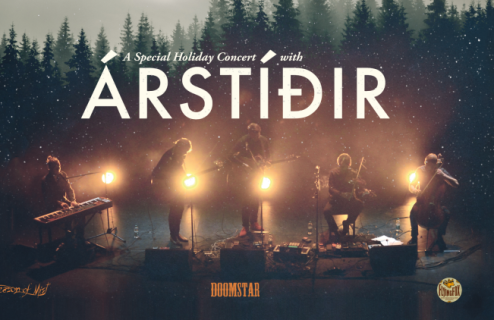